The Secret Language Of Stones by M. J. Rose 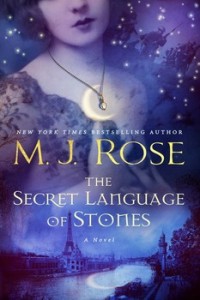 The Secret Language of Stones by M. J. Rose

AS WORLD WAR I RAGES AND THE ROMANOV DYNASTY REACHES ITS SUDDEN, BRUTAL END, A YOUNG JEWELRY MAKER DISCOVERS LOVE, PASSION, AND HER OWN HEALING POWERS IN THIS RICH AND ROMANTIC NOVEL BY NEW YORK TIMES BESTSELLING AUTHOR M.J. ROSE.
Nestled deep within Parisís historic Palais Royal, safe inside La Fantasie Russieís once-bustling workshop, young, ambitious Opaline Duplessi spends her days making trench watches for soldiers at the front and mourning jewelry for the mothers, wives, and lovers of those who have fallen. Opaline has a rare gift, a form of lithomancy that allows her to translate the energy emanating from stones. Certain gemstones enable her to receive messages from beyond. In her mind, she is no mystic, but merely a messenger giving voice to soldiers who died before they were able to properly express themselves to loved ones. Until one day, one of these fallen soldiers communicates a messageódirectly to her. So begins a dangerous journey that will take Opaline into the darkest corners of wartime Paris and across the English Channel, where the exiled Romanov dowager empress is waiting to discover the fate of her family.

This is second book in a series but works well as a stand-alone too.

The book follows Opaline Duplessi who is the daughter of Sandrine from the previous book. She’s a jeweler who during the war makes talismans for women who have lost their loved ones in the war. She hears things through the stones and can give their last word to their loved ones.

Opaline just want’s to be normal and isn’t too happy with La Lune gifts she has. She doesn’t want her mother to teach her any magic and I didn’t get what her problem was with her mother. There were some issues between Opaline and Sandrine and I would have liked to learn more about that.

One time she makes a talisman for a woman who’s lost her son. Usually when she speaks with the dead through the stones, the dead leave her right away. But Jean Luc keeps speaking with her for a long time, and Opaline starts to fall in love with her ghost lover. I think it went on too and started to feel bit weird.

I liked Opaline, she’s loveable and kind, but at times I felt fustraited with her lack of wanting to learn about the magic she posses.

While I loved this book, it did not captivate me as much as The Witch of Painted Sorrows. Can’t really say why that is but there you go. But all in all, I loved this book and would have wanted to know what happens next. I look forward to the next book!

M.J. Rose grew up in New York City exploring the labyrinthine galleries of the Metropolitan Museum and the dark tunnels and lush gardens of Central Park and reading her motherís favorite books before she was allowed. She is the author of more than a dozen novels, the co-president and founding board member of International Thriller Writers, and the founder of the first marketing company for authors, AuthorBuzz.com. She lives in Greenwich, Connecticut.

Please visit her website, her blog: Museum of Mysteries
Subscribe to her mailing list and get information about new releases, free book downloads,
contests, excerpts and more.
Or send an email to TheFictionofMJRose-subscribe at yahoogroups dot com

To send M.J. a message and/or request a signed bookplate, send an email to mjroseauthor at gmail dot com

CLICK ON THE BANNER
TO READ REVIEWS, GUEST-POST AND EXCERPT

Here’s what I’ve had in the past month: 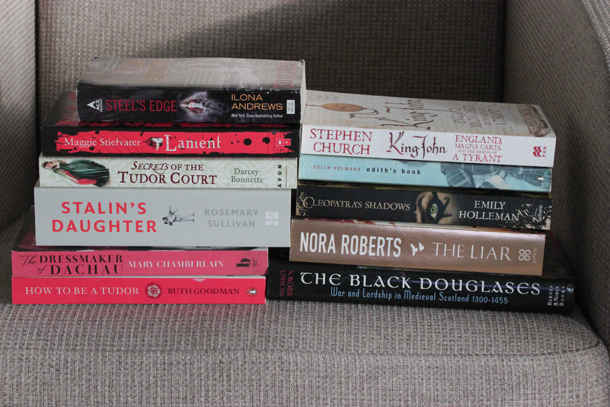 Steel’s Edge by Ilona Andrews (bookmooch)
Lament by Maggie Stiefvater (bookmooch)
Secrets of The Tudor Court by Darcey Bonnette (bookmooch)
Stalin’s Daughter: The Extraordinary and Tumultuous Life of Svetlana Alliluyeva by Rosemary Sullivan (purchased)
The Dressmaker of Dachau by Mary Chamberlain (purchased)
How to be a Tudor: A Dawn-to-Dusk Guide to Everyday Life by Ruth Goodman (purchased)
King John: England, Magna Carta and the Making of a Tyrant by Stephen Church (purchased)
Edith’s Book: The True Story of How One Young Girl Survived the War by Edith Velmans (bookmooch)
Cleopatra’s Shadows by Emily Holleman (purchased)
The Liar by Nora Roberts (purchased)
Black Douglases: War and Lordship in Medieval Scotland, 1300-1455 by Michael Brown (bookmooch)

The Lord of Ireland by E.M. Powell

The Lord of Ireland (The Fifth Knight 3) by E.M. Powell

England, 1185. John is a prince without prospect of a crown. As the youngest son of Henry II, he has long borne the hated nickname ëLacklandí. When warring tribes and an ambitious Anglo-Norman lord threaten Henryís reign in Ireland, John believes his time has finally come. Henry is dispatching him there with a mighty force to impose order.

Yet it is a thwarted young man who arrives on the troubled isle. John has not been granted its kingshipóhe is merely the Lord of Ireland, destined never to escape his fatherís shadow. Unknown to John, Henry has also sent his right-hand man, Sir Benedict Palmer, to root out the traitors he fears are working to steal the land from him.

But Palmer is horrified when John disregards Henryís orders and embarks on a campaign of bloodshed that could destroy the kingdom. Now Palmer has to battle the increasingly powerful Lord of Ireland. Power, in Johnís hands, is a murderous forceóand he is only just beginning to wield it.

The book starts after a decade after the last book ended. The Palmers have settled in their life away from the court, but then King Henry summons Benedict to look after his son John on his campaign in Ireland. Theodosia is supposed to stay at home but however she finds her way into Ireland while posing as a nun.

Again I wish I had read the first book because I want to know how Theodosia and Benedict met. And why Theodosia is such a secret since Henry isn’t known for being faithful husband… But the books stand well as a stand-alone too.

I really liked how John and Hugh de Lacy were portrayed. I don’t think I’ve read books featuring de Lacy so it was great to have him here. Not many books concentrates on John’s Ireland campaign so this was a fun change.

There is less mystery here but lots of action and no dull moments. Looking forward to read the next book! Born into the family of Michael Collins (the legendary revolutionary and founder of the Irish Free State) and raised in the Republic of Ireland, she lives in north-west England with her husband, daughter and a Facebook-friendly dog.

She reviews fiction and non-fiction for the Historical Novel Society, blogs for English Historical Fiction Authors and is a contributing editor to International Thriller Writersí The Big Thrill magazine.

Friday, June 10
Excerpt & Giveaway at Passages to the Past

Monday, June 27
Interview at Oh, for the Hook of a Book!

Tuesday, July 5
Excerpt at What Is That Book About